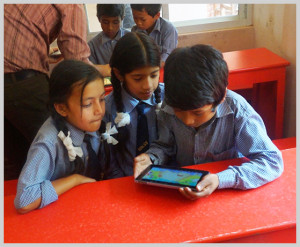 Outblaze founder and CEO Yat Siu has a new blog post describing the reaction of children at a school who received a donation of Android tablets and school supplies sponsored and organized by Outblaze, ThinkBlaze, and Animoca.

… the power of child-driven learning was clearly evident within just minutes of us passing out the tablets. My son had dutifully prepared a little step-by-step instruction assuming (correctly) that none of these Nepalese children in a remote village up in the mountains had ever seen such a tablet before and would therefore have difficulty using them. Many of the students don’t have electricity at home, let alone own any kind of digital device.

What actually happened was that instead of being a “child lecturer” educating novices on the use of a technologically sophisticated device, my son ended up being more of an agile facilitator, a sort of sysadmin, stepping in when something appeared broken. This arrangement worked beautifully. In under 5 minutes an entire classroom of children, whose command of English was very poor (and my son speaks no Nepalese), were exploring their Android tablet, in some cases opening up new pre-installed educational apps, in other cases racking up high scores and 3 stars in Alphabet Car. It looked like the students could continue playing, engaging and learning from the tablets without adult supervision as competently as children in the developed world who are accustomed to regular tablet use.

Read more about the event and resulting ideas on Yat Siu’s blog, or see a description of the donation on the Outblaze Blog.